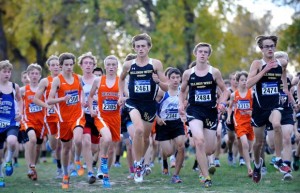 The Midland Roundtable was started and organized in 1947 when Billings and the surrounding areas was called the Midland Empire.  The Roundtable was formed by a group of individuals who were highly involved and interested in promoting sports and athletics of the local area.

Roundtable’s first President was Herb Klindt, who was a head coach at Rocky Mountain College and a donor to the school’s athletic programs over the years.  If one was to look over the membership records and at the former Presidents of the organization, one would find a long list of individuals who have lived up to promoting local sports and athletes at all levels throughout the area either as coaches, fans, players, parents, or donors.

Courtesy of Casey Page – Billings Gazette
Central’s Julianna Arellano (2) gets her foot on the ball ahead of Corvallis’ Corinne Sanderson (22) in the first half of the Class A quarterfinal game at Rocky Mountain College on Saturday, October 18, 2014. Read more >

The Midland Roundtable’s main focus and theme is “devoted to foster and perpetuate more and better sports”.

The Midland Roundtable meets once monthly for a luncheon and guest speakers. The meeting begins at noon on the first Thursday of each month except on holidays. Each month different coaches, players or athletic directors are invited to come and speak about their teams, programs and the young men and women athletes in our area.

The Midland Roundtable over the years has sponsored three major activities each year for the athletes.

The first of these events is the “Top Ten” track meet which is generally held on the first Tuesday in May.  The athletes from the surrounding area with the ten best qualifying times or distances for that year are invited to participate in this meet.  The Chairman is a former coach Doug Dierenfield.

The second event is the Athlete of the year banquet, where the top five male and female athletes from Billings are recognized for their athletic accomplishments as well as student and community involvement. From the five finalists one male and one female is selected. Recently a new award has been introduced and is awarded for the most courageous and is called the Kathy Maier award after a former Roundtable member who lost a battle with health issues. The Chairman for the Athlete of the Year program & Banquet is Dana Bishop.

In June the Montana – Wyoming all star girls and boys basketball games for graduating seniors are the final events for the year. The yearly series is played in Sheridan, Wyoming on a Friday evening and in Billings on Saturday evening.  The event chairmen are Doug Dierenfield, Richard Begger, Jerry Sauther & Wayne Ware.